Kiva Confections is now a household name in cannabis dispensaries across the United States, but the moniker gracing the company’s signature chocolate, gummy, and mint products could have been very different.

Kristi Palmer, co-founder of Kiva, Oakland, CA, says she and her husband, co-founder Scott Palmer, had another name selected and were about to print their first round of packaging when a trademark attorney recommended they go a different route.

“It just wasn’t quite right,” Kristi Palmer said. “So, we went back to the drawing board—call the printer, press the stop button, and hold the phone. We’re going to make a change.”

The Palmers drafted a list of syllables they liked, including Kiva. Scott’s mother, who is well-versed in Native American studies, recognized it as the name of the Pueblo people’s underground, ceremonial meeting places.

“It’s a nice way to represent what cannabis does, how it brings us together,” Kristi Palmer says. “People often use it to celebrate or to build a community.”

Kiva Confections has much to celebrate. It marked its 10th anniversary in 2020—a landmark year for the cannabis industry—and launched Lost Farm, its newest brand for experienced cannabis consumers. With a move to a spacious production facility ahead, Kiva Confections is looking to the next decade and beyond. 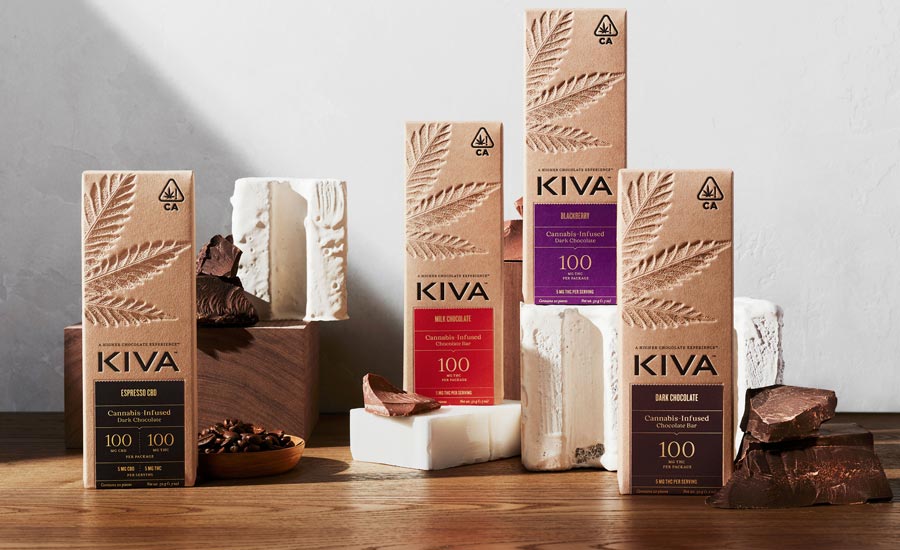 Before learning the art of crafting edibles, the Palmers found each other through a different medium: photography. They graduated with degrees in commercial photography in 2007, right at the onset of the Great Recession. With the economy sinking, creative jobs were in short supply.

To make ends meet, the Palmers turned to cannabis. They set up a small cultivation in their Bay Area backyard, growing clones in a shed they sold to area dispensaries.

“We did that for a year or two, but it became clear that we weren’t farmers—certainly not indoor farmers by any stretch of the imagination,” Kristi Palmer says. “Edibles were something that we felt very passionate about. The products at that time were pretty unprofessional, a little bit experimental and kind of scary. We thought this is an area where we could really innovate and create a brand that could stand out among the rest.”

In 2010, the Palmers began developing chocolate bars in the kitchen of the San Leandro house Kristi grew up in. They found chocolate and cannabis to be a “match made in heaven,” Kristi Palmer says. 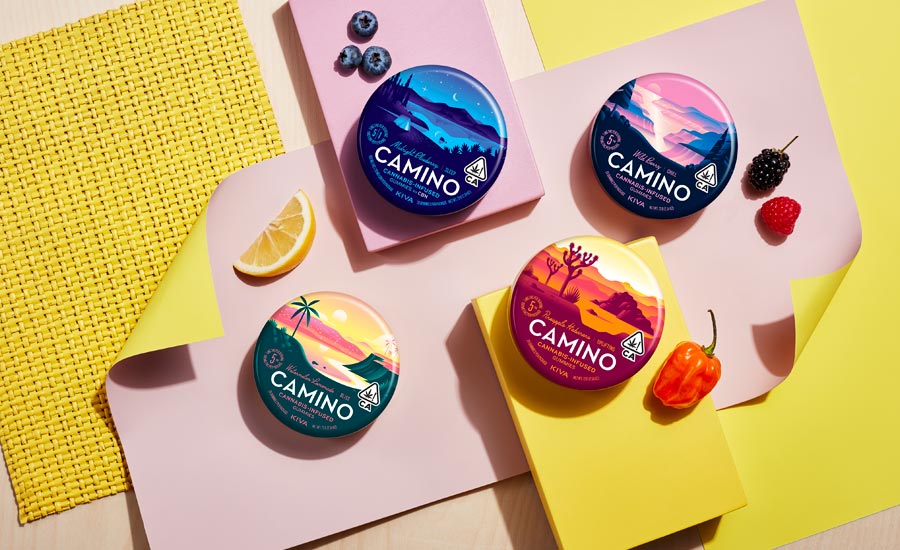 “Chocolate is nice and rich and has these really beautiful flavors that go really well with cannabis,” she says. “You can get started on a very small scale with chocolate. You can do a tiny tabletop, one-pound machine, all the way up to the equipment that you see in a Hershey’s facility. It was great for us, from that perspective, since we were starting with really nothing.”

The Palmers also found chocolate to be an accessible format for both novices and established connoisseurs—and a stepping stone to normalizing cannabis consumption.

“Is there any friendlier, more approachable medium than chocolate? Who doesn’t love chocolate?” Kristi Palmer says. “It really made sense to lower the barriers to entry for newcomers and cannabis fans alike. It was just a natural starting point.”

After firming up their formulations, packaging and logo, the Palmers leveraged the relationships they built through their cultivation endeavor to get Kiva chocolate into 40 or 50 stores, including Elemental Wellness, Harborside, and Berkeley Patients Group. At the time, they loaded the chocolate into Scott’s SUV from high school and took it directly to the dispensary locations.

“It was very different from today,” Kristi Palmer says. “You just put the chocolate bars into the back of your car, drove down there, and said, ‘hey would you like to buy one box or two boxes, or hopefully four boxes?”

By Septembe2011, Kiva Confections had outgrown its kitchen operation. The Palmers had been eyeing a 1,000-sq.-ft. commercial location in Oakland, but the $1,000 monthly rent held them back.

But before long, they couldn’t fill orders without the extra space. The Palmers got the lease, moving their production equipment in a day and a half. Scott installed an air-conditioning unit on the roof, and they were back in business.

Since then, Kiva has moved four or five times around the Oakland and Alameda area to locations within a few miles of each other.

“We have grown a little bit piecemeal over the years, but it’s allowed us to be flexible and scale as needed,” Kristi Palmer says. “And it’s hard to look into the future and get a giant piece of real estate that you’re going to pay for and not need, and real estate for cannabis businesses is just hard to come by as well.”

After launching Kiva bars, the company introduced its line of Terra Bites, chocolate-covered pieces with doses of 5 mg THC, and Minis, palm-sized squares of Kiva chocolate.

Kristi Palmer says consumers asked for products that were easier to dose, and they quickly found popping a perfectly portioned piece was much easier than breaking apart a bar or square of chocolate.

“The Minis never went anywhere,” Kristi Palmer says. “It’s just a good example of how your consumer may ask for something specific, but you have to read between the lines and really try to better understand what their objective is.”

The experience activated Kiva Confections’ mission of ultradosability. Apart from the Kiva bars, the company’s creations have been designed to be precisely dosed, discreet, and convenient.

In 2016, Kiva launched Petra mints, with each piece featuring 2.5 mg THC. At the time, budtenders and other edible makers asked why Kiva decreased its potency when products with up to 1,000 mg were hitting the market.

“It was important to us to maintain this level of control and responsibility for the consumer,” Kristi Palmer says. “Our target is still that mother-in-law, grandma, casual consumer, newbie, somebody who hasn’t tried cannabis ever before, and we don’t want to blow their socks off. It’s a great way to lose trust and lose that consumer forever. So, dosability was absolutely key.”

While microdosed products have been Kiva’s bailiwick, the company recently developed the Lost Farm brand with budtenders and other experienced consumers in mind. The line’s gummies, introduced in late 2020, and its chews, following in February 2021, each contain 10 mg THC, delivered through strain-specific, 100 percent live resin. 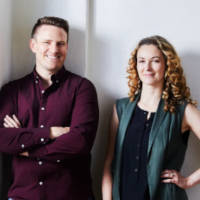 “Our target is still that mother-in-law, grandma, casual consumer, newbie, somebody who hasn’t tried cannabis ever before, and we don’t want to blow their socks off. It’s a great way to lose trust and lose that consumer forever. So, dosability was absolutely key.”

“You get these really interesting, unique strains that are grown in only small amounts or as an heirloom variety, and then once it’s gone, it’s gone,” Kristi Palmer says. “So, that’s been a really fun component of the brand, too.”

While medical cannabis use has been legal in California since 1996, the state’s voters didn’t approve adult-use until two decades later. The measure took effect Jan. 1, 2018.

Kiva Confections got a first pass at the regulations just six weeks before they went into effect. Though the company had eight years’ experience producing cannabis products—and had instituted quality and safety standards borrowed from the traditional food industry—adjusting to the new regulations was no easy feat.

Kristi Palmer said Kiva had to reformulate 30 SKUs and update their packaging to meet labeling requirements.

“It was a ‘rise to the occasion’ and ‘all hands on deck’ kind of a year, but we made it,” she says. “A lot of brands did not, unfortunately. Regulations are very expensive. You have to be able to raise money or hire a team to get everything in place that the state or the city is requiring. It was really painful, but we’ve made it.”

Kiva Confections didn’t have long to catch its breath. With the start of the COVID-19 pandemic in early 2020, the company reconfigured its 14,000-sq.-ft. manufacturing space to make it safe for employees. It also discontinued its Churro Kiva bar for a short time, since producing it required employees to stand close together

Despite the difficulty, the COVID-19 pandemic helped legitimize cannabis businesses, with many states declaring them essential alongside grocery stores and pharmacies.

“That was the best thing ever,” Kristi Palmer says. “It was like being told ‘you’re real, you’re a real business.’ There aren’t very many other moments like that I can think back on that underscore how important cannabis businesses are and how people really rely on cannabis.”

Like so many other cannabis companies, Kiva Confections hopes federal acceptance and legalization is on the horizon.

“That will be really exciting to see cannabis really becoming normalized and destigmatized and hopefully available to all of the people who need it and can benefit from it,” Kristi Palmer says.

In the meantime, the company plans to move from its current facility to a location in Alameda with 70,000 sq. ft. within the next year. The move will offer more room for office space, as well as manufacturing and packaging.

Kristi Palmer says the company has filled out its three-year new product pipeline, and plans are also in the works to move into other markets beyond California, Arizona, Nevada, Hawaii, Illinois, Ohio, and Michigan.

However, she says the last decade of success—and its future progress—wouldn’t be possible without Kiva’s employees.

“We’re just so proud of our accomplishments and our team,” Kristi Palmer says. “The Kiva team propels the entire company forward. They are the most passionate group of individuals I have ever seen anywhere. I’m just extremely fortunate to work with so many great people.”